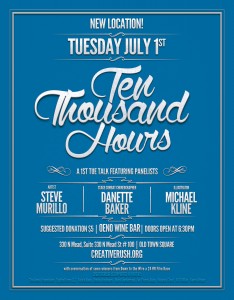 * Winners of Down to the Wire will be invited to talk about their experience afterward.

** InTheMiddleOfAmerica.com will be selling a 100 pictures from their site. All proceeds will help raise funds for CreativeRush 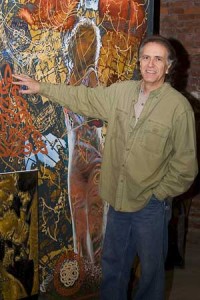 Steve Murillo is a popular Wichita artist, well know for his wall murals and large public art sculptures. He received his BGA and MFA from Wichita State University, was a graduate teaching fellow at WSU and later taught there for twelve years. He was resident artist at the Michael Karolyi foundation in southern France, served as an artist-in-resident for three years in the state, and was recently awarded an artist residency at Rocky Mountain National Park. Steve maintains an active studio and gallery in Old Town, Wichita, KS. As artist consultant to the City of Wichita, he has been involved in a number of capital improvement projects, including a newly installed Solar Calendar in Central Riverside Park; and a major environmental work at Sedgwick County Park.

For more info on his past professional positions, residencies, various commissions,
projects, and public art projects, read his full biography at Murillo Studios.

is a Stage Combat Choreographer, Actor, Director and Teaching Artist.   Her fight choreography work ranges from comic sword-play (Twelfth Night) to gun play (The Grapes of Wrath) to fisticuffs and catfights (Picnic) to knife fights (Violet) with various other fighting styles in between.  Her acting career has taken her to theatres across the country from New York to Idaho appearing in – among others – Bloody Poetry (Aegean Theatre Company, NY), Crash Course (American Globe Theatre, NY), The Rainbow Factor (Director’s Company, NY), Summer & Smoke (Monomoy Theatre, Cape Cod), Romeo and Juliet (Cleveland Playhouse, OH), Arcadia, Macbeth & Blithe Spirit (Wichita Center for the Arts, KS), Hank Williams Lost Highway (Cabaret Oldtown, KS) and The Cherry Orchard (Guild Hall, KS).  She is a member of Seven Devils National Playwrigths Conference acting company in McCall, ID, spending two weeks of every summer helping to develop new plays for the American theatre.  She is also a frequent director for their new play development for high school playwrights.  In the world of academia, Danette holds an adjunct faculty position in theatre at Wichita State University’s School of Performing Arts where she teaches Art of the Theatre, Acting, Stage Combat and Stage Movement. At WSU she also directed The 39 Steps and new play contest winner Freezeframe, which was selected to be performed at the American College Theatre Festival for Region V in 2007.  She’s also presented workshops in acting and stage combat at area high schools, colleges, state HS theatre festivals and the Kennedy Center American College Theatre Festival for Region V.

Danette was born and raised in Wichita, KS and received a BA in Speech/Theatre from Wichita State University in KS where – coincidentally – she also met her future husband Ed.  She earned an MFA from Ohio University’s Professional Actor Training Program (Athens, OH) in 1992, married the love of her life, and set off on an exciting 6-year adventure in NYC.  As enthralling as the hustle and bustle of NYC was, Danette and Ed missed the vast open plains of Kansas and in 1998 returned home.  At the ripe old age of 41 Danette embarked on a new career in the field of stage combat through the Society of American Fight Directors (SAFD).  She is a recognized Advanced Actor Combatant with the SAFD and holds certificates of proficiency in eight forms of stage fighting: Unarmed, Broadsword, Rapier & Dagger, Smallsword, Sword & Shield, Knife, Single Sword & Quarterstaff, as well as a certificate in Theatrical Firearms Safety. Oh, and she holds a 2rd degree brown belt ranking in Tomiki-Ryu Aikido and is a pretty darn good shot with a .22 semi-automatic.

Danette is a 6 time recipient of the Mary Jane Teall Theatre Award for Outstanding Acting, she and her husband Ed receive the Ruth McCormik Award for Outstanding Theatre Educator in 2012, she has twice been recognized as the Outstanding Female Performer in the Society of American Fight Directors National Advanced Actor Combatant Workshop, she is a member of the Association of Theatre Movement Educators and the Society of American Fight Directors. Danette and her husband Ed reside in Wichita along with their cat Sophie.

An illustrative contributor to Kids Discover magazine for more than 20 years, Michael Kline also lists such companies as Penguin Publishing, Family Fun magazine, Storey Publishing, and Reader’s Digest among those who receive his hand-addressed (and decorated) invoices. He is the author/illustrator of WordPlay Café, a phonetic romp for the knee-high generation, and recently released his first attempt at left-handed imagery in The Doodles of Sam Dibble (Grosset and Dunlap).