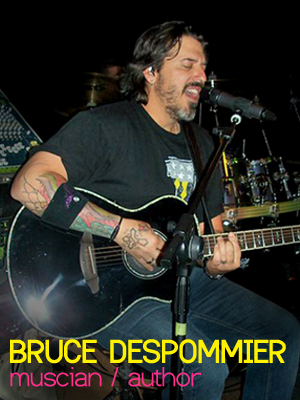 Bruce Despommier has attended UMASS Amherst, served 4 years in the USAF, taught professional tennis, and is an air traffic controller. He’s been involved in the music industry, both locally and nationally, for over 30 years and is recently an author of Let’s Get Rockin’, an illustrated guidebook to making a rock band. Currently residing in Wichita, Bruce plays at Gracepoint and in his current rock band GeTBaD.

Q: What are you working on today?
A: I am currently working on a website that parallels the book I wrote, to include interactive videos along with the illustrations.

Q: What project (film/tv/song/commercial/food/etc) most impressed you in the last year? Why?
A: What has impressed me in the last year has been the 3D technology at the movies. It has made “just going to a movie” an experience of just more than simply watching the action.

Q:  If you unexpectedly received $100 today, what would you spend it on?
A: I’d take my wife and daughter out to a restaurant we have not eaten at before. I love experimental and nouveau cuisine.

Q: You Pick: Top 4 artists/apps?
A: Since I am a musician, I really don’t have a “top 4” artists…but currently I’m listening to Burn Halo, Danko Jones, Marvin Gaye, and Led Zepplin (my favorite artists 4 as of today). 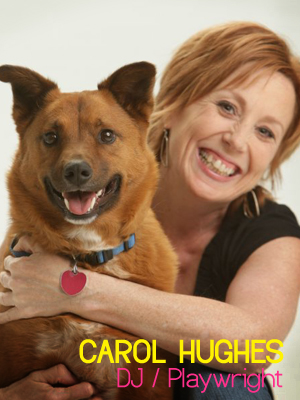 Carol Hughes has been on air at KFDI for almost 12 years and is also the Music Director and Assistant Program Director. In her spare time she writes plays for Mosley Street Melodrama (two every year) and takes agility and obedience classes with her dog, Buddy. The cutest dog in the world by the way. She also does a lot of charity work including co-chairing ArtAID for the past 15 years. Carol went to Wichita State University where she got two degrees and then landed a job as the most-over-qualified receptionist ever at a radio station…and is still working in radio 20 years later.

Q: What are you working on today?
A: Scheduling music, walking the dog and my new play for Mosley Street Melodrama.

Q: What project (film, television, song, commercial, food, etc) most impressed you in the last year?
A: Why? TOUGH! It’s tough to pick just one. Book: The Help by Kathryn Stockett. I could have started at the beginning and read it again immediately after finishing it. Movie: Probably The King’s Speech and The Conspirator…I love history and I love historical accuracy. Stage: Definitely was Spamalot. BRILLIANT!

Q: If you unexpectedly received $100 today, what would you spend it on?
A: Another dog class or maybe some cute clothes…or maybe a haircut. Probably a haircut.

Q: You Pick: Top 4 artists/apps?
A: Hmmmm…The American Life app, Fresh Air with Terry Gross app, Eric Church and whatever new music I need to be listening to at the time. 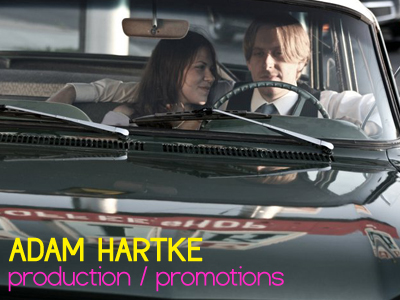 Q: What are you working on today?
A: At this moment I am reconciling the 311 event financials, hashing out a booking contract for Gillian Welch & Gooding, and working on promo for Bela Fleck, Merle Haggard, Martin Sexton, Riders In The Sky, Truckstop Honeymoon, The Temptations, Jazz at Lincoln Center Orchestra with Wynton Marsalis, & Lewis Black.  Additionally I am researching potential bookings and maintaining relationships with agencies sending upcoming shows.  After typing that I am also starting to realize a desperate need for more creative outlets in my everyday life!

Q: What project (film, television, song, commercial, food, etc) most impressed you in the last year?
A: The production quality, story lines, and historical accuracy of Mad Men is pretty astounding.  Also, the most recent True Grit is now one of my most favorite movies of all time.  I’m a big John Wayne fan, but I have to say the Coen Bros version was amazing and superior in many ways.  It was definitely a stark contrast to the classic western sensationalism that made such great characters as Rooster Cogburn back in the day, but it pulled off the realist approach by holding true to historic details, something increasingly hard to do, and something that many great westerns never came close to doing.  Not making them less superior, just unique and awesome in their own way.  I was also super impressed with the live show Primus put on, Les Claypool plays the bass like its nobody’s business, crazy talented and super tight show.  I have drifted so far from the recorded world lately it is hard for me to have educated opinions on a lot of current music/film.  I usually pick stuff up a few years after its release.  I guess I like things with a little social patina.

Q: If you unexpectedly received $100 today, what would you spend it on?
A: I would put it in my savings account.

Q: You Pick: Top 4 artists/apps?
A: I only use my phone for calling/texting and the occasional twitter update.  My frugalness can only justify spending $45/month on a Cricket phone plan.  I am at a computer all day, so I don’t need additional computing abilities on my phone.   I yearn for days end when I can sit quietly gazing at my garden, away from dull screens and fluorescent lights.  I’m not a big fan of mp3’s, I think they sound like dog farts.  That said, I do listen to hours on end of Stuff You Should Know podcasts on an ipod while driving, and on the weekends when I am at home relaxing.  SYSK brings peace to my mind, I love it.  Other than that I try to stick to vinyl, tapes, and cd’s.  I am not really sure what app’s do.  Perhaps I should learn, but I’m perfectly content with wallowing in the bliss of disconnection while turning a deaf ear to conversations laced with excitement over technical progress/fads.
[vimeo video_id=”27451273″ width=”400″ height=”300″ title=”Yes” byline=”Yes” portrait=”Yes” autoplay=”No” loop=”No” color=”ff9933″]